ON RETURNING TO Buenos Aires he was greeted like a hero. Among those who raise it is our colleague Guillermo Salatino.

“Guillermo’s triumph at the 1974 Masters was decisive for the future of tennis in Argentina.” This sentence belongs to Juan Carlos Belfonte, known in the racket world simply as “El Profe”, historical physical trainer of the Davis Cup team and Vilas’ only companion in that historic deed in Melbourne, which will be 47 years old this December 15.

The 1974 season was the one of the great explosion of Vilas in the international circuit, where he won seven tournaments and he stayed with the Grand Prix, which was the list of players who scored the most points in the year.

On November 18, the ATP of Buenos Aires began (at that time called the Republic Championship), where For Guillermo, it was enough to add three points to ensure leadership. And he got them after winning the first round of doubles together with Manuel Orantes over Roberto Carruthers and Oscar Escribano by 5-7, 6-1 and 6-2, since at that time singles and doubles units were added for the aforementioned Grand Prix, which granted places for the end-of-year Masters.

Sunday, November 24 Willy was crowned on the central court of the Buenos Aires Lawn Tennis by beating his partner in doubles 6-3, 0-6, 7-5 and 6-2 in the final, in which it was the second title in the tournament in his country, which would win consecutively until 1977. Two days later, at 10.30 a.m., he took off for Australia with Belfonte, Manuel Orantes and his wife Virginia, according to the precise data recorded in the excellent work History of tennis in Argentina, by Eduardo Puppo and Roberto Andersen.

The planning of that journey was done on the fly and without much concrete information, as El Profe recalls, who kindly received us at his home, a small museum of Argentine tennis: “I traveled at the request of Guillermo, as Oscar Furlong told me, who at that time was the person in charge of professional tennis for the Argentine Tennis Association. He himself was the one who made the request before the Secretary of Sports to get the tickets. It really was like an adventure. You have to place yourself in what it meant to have to go to the other side of the world more than 40 years ago. It was a beautiful trip, but one in which you knew that, practically, you lost all contact with your family ”.

The other great protagonist of that season had been a generational tennis player from Vilas and one of its classic rivals: Jimmy Connors, who had won three of the four Grand Slams (Australia, Wimbledon and the US Open). Unexpectedly Jimbo dropped out of the Masters due to illness a few days before the start of the contest. The Masters Tournament was divided into two zones: the Blue Group made up of Björn Borg (Sweden), Onny Parun (New Zealand), John Newcombe (Australia) and Guillermo Vilas, while in Red they were Ilie Nastase (Romania), Raúl Ramírez (Mexico), Manuel Orantes (Spain) and Harold Solomon (United States). 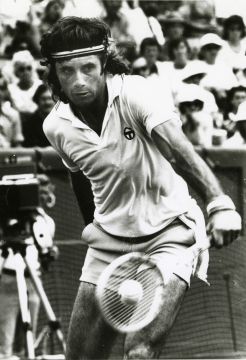 CONCENTRATION for the magnificent left-handed player from Mar del Plata.

The previous days were of great anxiety, as Belfonte recalls: “One of the stopovers before arriving in Melbourne was in Papeete, where the three of them enjoyed the beach and laughed at me, because I was walking non-stop on the sand, thinking about how to plan the training. There were many elements to take into account that had me anxious, such as being in a place with a diametrically changed schedule. He supposed it wasn’t going to be easy. As soon as we arrived, I told Guillermo that we were going to do three training sessions a day, to help him release the tensions he had, taking advantage of the fact that he could adapt, since we arrived well in advance ”.

“His main concern was service, because he was going to play on grass”, recalls Belfonte, who continues the evocation with an anecdote: “I was friends with Neale Fraser, one of the best Australian players of all time, a great Davis Cup captain and an excellent connoisseur of our sport. We went to his house, where he had a field installed and after seeing him train Vilas he told me: ‘If he serves like this he will not have problems’, to which I replied with a laugh: ‘Now the issue is to convince him of that’ ” .

The time of the debut had arrived and in front he would have nothing less than John Newcombe, excellent local player, who in June of that year had reached number 1 in the world ranking. The Argentine’s performance was brilliant, surprising everyone with a good service and better return, to win 6-4 and 7-6 (2). For Belfonte it was a decisive success: “Guillermo had not arrived with so much confidence and he was taking it as he won games, but for that security to have increased, the victory against Newcombe was very important.”

Just 24 hours later, and in a torrid day, He should have met Onny Parun, another turf specialist. It was an extensive battle, where the Argentine he won the first set 7-5, lost the second 6-3 and the third seemed endless, as there was no tie break. With the score level at 8, he made a gesture to Belfonte of wanting to start because of exhaustion. Juan Carlos remembers his answer perfectly: “I told him clearly: ‘If you leave I’ll kill you’, or something like that (laughs). It was very important to overcome everything and be the winner. Luckily he listened to me and won ”. That last quarter was 11-9 and allowed him to qualify for the semifinals, although he still had the final match of the group against who would be his most difficult rival: Björn Borg. Vilas won 7-5 and 6-1, and advanced undefeated to the next instance.

It was the turn of the semifinal and it had already aroused some expectation in Argentina, reflected in the fact of appearing on the front page of the major newspapers. There he had in front of Raúl Ramírez, who throughout his career rarely managed to make Vilas uncomfortable with his game, to the point that the history between the two ended 11-1 for the Argentine.

With greater speed, the Mexican surprised him and won the first set 6-4, but slowly Guillermo was leading the game, doing his homework with patience to win 6-3, 6-2 and 7-5 in the following sets, since the semifinals and the final were played in the best of five sets. Vilas was in the decisive match, to play it with the great and talented Ilie Nastase, who had won the three previous editions of the contest.

The day was cloudy, but quite hot in Melbourne. The first set was extremely even and in almost an hour long, He was on the Argentine side in a tie break 8-6. The second was even more favorable (6-2) by surprising the Romanian with a permanent attack game. Glory was just one step away, but it was clear that Nastase was not going to surrender with docility and began with his classic “show” of dialogues with the publicLaughing discussions with the judges, with the clear objective of deconcentrating his rival. And he did it with those elements and with his fantastic tennis too, which they helped him to stay with the next two sets, both 6-3.

It was the moment of truth in the final fifth set. There Vilas returned to the game from the start, with great concentration, excellent returns and precise attacks. There were alternate service breaks, but Willy went 5-4 and served to try and win the title. He played each point with serenity and reached the match point, where he served 40-15 on Nastase’s drive, whose return was wide on the parallel.

Guillermo threw down his racket and took a big jump, as if wanting to touch the sky with his hands. He crossed the net and hugged his opponent, who congratulated him while an exciting “Ar-gen-tina, Ar-gen-tina”, from a handful of compatriots who had gathered in the old stands of the Koyoong Stadium, with a curious detail that Belfonte remembers: “As soon as the game ended, a boy ran down from the crowd, entered the court and hugged Guillermo. Later we learned that it was an Argentine named Jaime, a member of Gimnasia y Esgrima de Buenos Aires, who had paid for the trip to see the tournament ”.

He held up the trophy as a huge smile covered his entire face. When addressing the public, he immortalized a phrase: “Until a couple of months ago I thought that grass was for cows. Now I think it’s for the cows… and for the tennis players too ”. An ovation accompanied his words. The emotion that was experienced there was the same that many Argentines felt in our country, in un founding milestone for national tennis.

That week a fantastic Vilas was seen. That the words of Juan Carlos Belfonte ratify: “In my perception I never saw Guillermo’s tennis again as in that tournament: loose, youthful, not at all schematic. Throughout his career, I have seen him great games, but what he played at Masters 74, never again ”. Nothing would be the same anymore. An elite sport began to become massive thanks to that southpaw with the headband who, 47 years ago, it sat Argentina at the table of the great international tennis.