The new chapter of the CoD series is available for PC, PlayStation and Xbox, offering an original story and characters in a very familiar context.

Call of Duty Vanguard it’s so self-referential that it cites the famous “Press F to pay homage” meme, but can’t understand what it was originally simulating. The meme comes from a 2014 Call of Duty Advanced Warfare scene in which the player attends a funeral. In front of a soldier’s grave, the game freezes until you press the F button (on a PC keyboard) to pay homage to the fallen. It is a moment meant to be profound but, in reality, it only underlines the lack of interactivity of the series.

In Vanguard, there is a section where you are asked to clear a courtyard so that allies can advance. It happens to break them down for 15 minutes straight and they keep coming: when the last one dies, he is immediately replaced by a new soldier. The new soldier gets back into the same position as his fallen comrade and it’s super easy to lurk so you just have to pull the trigger to get him out. The process is the same when another soldier arrives: the game sends a new body, and the previous one disappears. F.

Eventually, it turns out that you had to shoot a specific enemy in a window on the opposite side to keep the scene going. As soon as you shoot that sniper, you are given permission to continue. Despite its high quality graphics, Vanguard cannot make people forget that they are simply playing a video game: you can see the mechanisms at work behind the scenes in practically every fight. At some point, you take part in the Battle of the Midway in the shoes of a fighter pilot. But even in the open skies, it feels like a box: by performing an evasive maneuver, you can find yourself touching the edge of the map that you can’t get out of. The game starts screaming “come back, you are leaving the mission area”, before returning a black screen and sending you back to the last checkpoint. RIP, Wade Jackson: Like Icarus, he too was killed by his own ambition. F.

Unlike Call of Duty WWII, Vanguard does more than just recall moments seen in the past. On the contrary, the title does a pretty good job of showing WWII from a new perspective. You take control of a team of superhero soldiers from several allied nations: an American pilot, a Russian sniper, an Australian demolition expert and a British paratrooper, who make up a team of highly skilled proposed in sauce Inglourious Basterds. They are captured and interrogated by a Nazi officer, and the story is told through the mind games implemented in the interrogation room, with some occasional return to the past in order to reveal the experience of each character.

A key moment sees the player caught in the middle of the Stalingrad bombing: it is sudden, violent and majestic. You can see the Russian city before the bombing, and then come back as bombs fall and buildings collapse all around. But it is the only moment of the entire campaign that will remain in your memory. Countryside avoid re-enacting D-Day and other passages of the War played to exhaustion on so many other occasions, but it is inexplicably familiar nonetheless. The lavish, visually spectacular cutscenes and great acting provided by a brilliant cast fail to mask it. 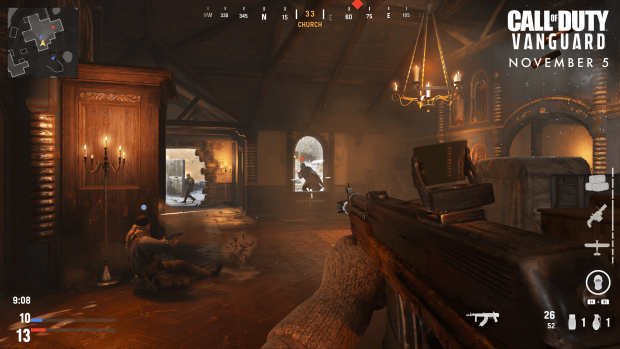 There is a moment when you have to swipe with a knife to get rid of a boss who can kill the protagonist with a single blow. You have to hit it three times, as if you were playing as Mario and you had to jump on Bowser’s head. There is another time to drag a wounded ally using only a pistol to take out the oncoming enemies on the spot. There is another in which one is brutalized with a first-person perspective. Yet another in which you are deprived of weapons and forced to move silently. Vanguard may not exactly cover all the moments seen in the old Call of Duty (which WWII did as a model), but it follows very similar paths. It’s like when you get dejà-vu when you visit a new place.

One area where Vanguard makes major improvements is the telling of a fictional story set in a real-life conflict. Essentially that’s what Call of Duty has always done, but when the story doesn’t leverage a dark military policy in a modern warfare context, it’s all a lot less tacky. The Nazis are the bad guys and this is something that any rational mind will be able to accept with some ease. Here they are shown as caricatures: they are racist, heartless monsters that you can take down without feeling too guilty. 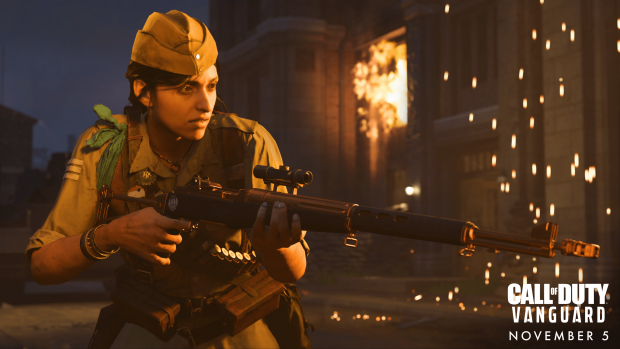 Call of Duty Vanguard also introduces new ideas: Each character has their own specialty, for example, although this rarely has an impact on regular gameplay. The Englishman can give orders, but he only utters phrases like “shoot that thing”, and the artificial intelligence obviously can’t shoot the thing you wanted it to shoot. The Russian sniper can move through rifts faster than anyone else. Demolition expert allows you to see the throwing arc of grenades and can carry more throwing items. And the pilot, for some reason, has some kind of aimbot with which he can clear out a room full of enemies by taking them all down with neat headshots. Yes, the pilot is the best infantry soldier, inexplicably.

In addition, blind fire has also been added, which allows you to fire from behind cover without exposing yourself. It doesn’t always work, so you tend to forget that this mechanic exists at some point in the game. And then there are destructible scenarios, which allow you to split wooden walls with the fire of your weapon. In single-player, this dynamic adds little, but it makes the weapons (which already convey high-level sensations, as always in Call of Duty) seem even more devastating. However, it is multiplayer, where most players will spend hours and hours, the mode in which destruction leaves the most its mark. 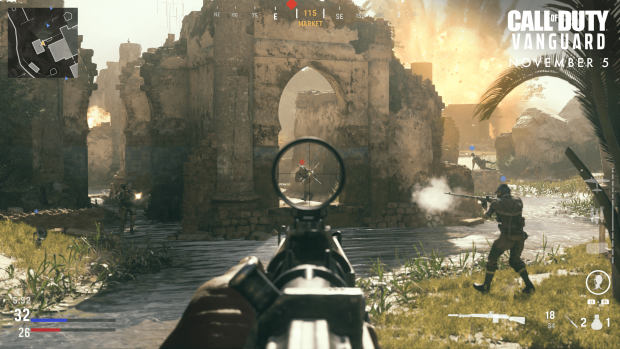 It’s hard to talk about Vanguard’s multiplayer, because it’s essentially identical to that of the latest Call of Duty. The only big difference is the destruction. In this series it has always been possible to shoot through walls, only now pieces of wood fly away with each shot, which means that players can also to see through the walls. This opens up new corners in all maps. But having “new corners” from which to be hit is not necessarily, in a game where death is quick and frequent. Basically, it works like a Rainbow Six Siege on steroids: you run, jump, slide, and throw grenades at random places like there’s no tomorrow. Die. Get back into the game. Repeat. FFF

Other shooters have maps, Vanguard arenas are more than meat grinders. Most of them are compact and it is almost impossible to avoid being flanked, as players often “spawn” you (ie, are reintroduced into the game after being eliminated) directly behind you. The only way to escape the mince is to play Search and Destroy, in which everyone has only one life per round and then stops acting as if they have just drained a pitcher of coffee. You can reduce the chaos of encounters with the new functionality of the Battle Rhythm, which allows you to dictate to the game which type of match you want to join based on the number of users in the game; but that doesn’t change the essence, Call of Duty always works as if everyone had a rocket on their back. There are so many maps for a Call of Duty (as many as 16), so at least there are so many battlefields to master while piling up hundreds of hours of gameplay. 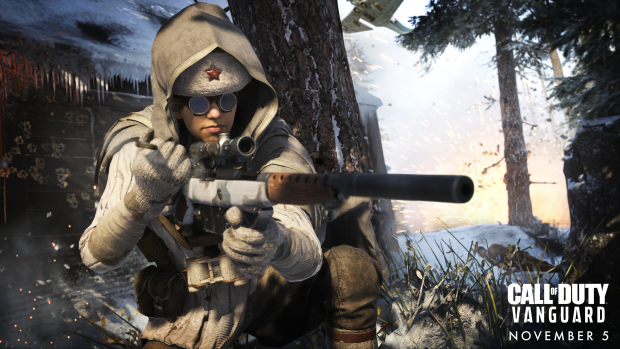 There is also the new Patrol mode, which sees the team busy capturing a point in constant motion. The mode fits perfectly with Call of Duty’s “run and shoot” gameplay, better than it does capturing and holding onto a static area. Hill of Champions is another nice addition, adding a battle royale touch to the classic Shootout. Set across four dedicated maps, the mode pits eight teams of two or three players together until only one is left standing. Between rounds, more powerful weapons and equipment can be purchased at specific stations. In hindsight, it’s the only mode (along with Search and Destroy) where team play really matters.

This is another problem with Vanguard multiplayer. Call of Duty has always been a title “for selfish”, but the developers have worked hard over the years to incentivize the game about goals and cooperation. The Scorestreaks rewarded those who captured and held control of the zones, not those who camped and killed, but now they are gone, having been replaced by the old Killstreaks. These encourage you to look after only yourself and find a good place from which to kill strips of enemies in relative safety, in order to unlock the most powerful arsenals in the game. 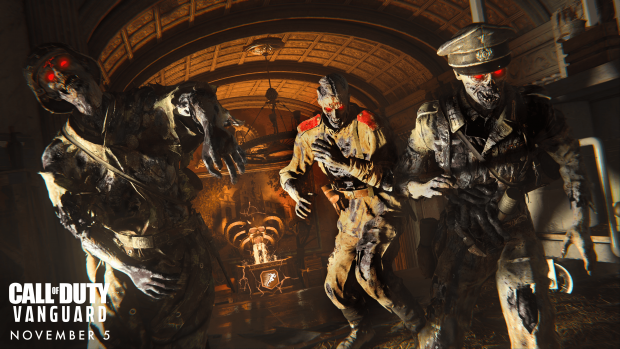 As for the Zombie mode, perhaps it is the one with the most innovations. It will sound a little weird after reading that Vanguard is so “mindful” of tradition but it’s hard to be a fan, as old fans of the series, of the new direction of the mode. It starts from a hub area, from which you move through portals to complete objectives and, in the end, go back. There are three types of objectives and three types of enemies, and it takes little time for all of this to become repetitive. Simply shooting zombies appearing in front of you from a portal is not as satisfying as barricading windows and trying to fend them off. a wave of undead.

It’s hard to write a Call of Duty review lately – it’s one of those games that come out once a year and it seems like everything has been said about them dozens of times already. It must be the same for the developers, who are clearly running out of ideas: Vanguard is not a bad game in any way, on the contrary, it is just that it does not convey any unique sensations and, in a ranking of the chapters of Call of Duty, it is more or less in the middle. It will be quickly forgotten as soon as another one comes out in less than a year. F.